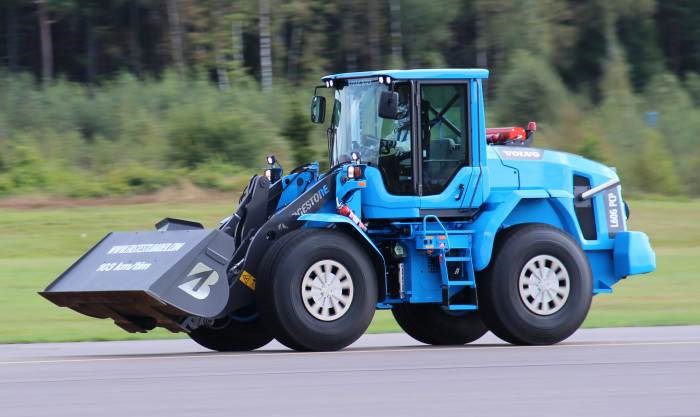 A few hundred spectators were attracted to Eskilstuna Airport to see Swecon’s Volvo L60G PCP (Performance Concept Prototype) wheel loader beat its own world record, and reaching the dream limit of 120 km/h. The conditions were perfect with sunshine, more than 20 degrees in the air and a 1,800 meters long runway to work with.

A few hundred spectators were attracted to Eskilstuna Airport to see Swecon’s Volvo L60G PCP (Performance Concept Prototype) wheel loader beat its own world record, and reaching the dream limit of 120 km/h. The conditions were perfect with sunshine, more than 20 degrees in the air and a 1,800 meters long runway to work with.

Those who come to witness the world record were not disappointed. It took eight trips along the runway before the record driver, 28-year-old Karin Olsson, found the right settings and could pass the target speed of 120 km/h. Thus improving the old world record by 17 km/h and at the same time reaching Swedish highway speeds, something that has been a dream target in the planning of the attack on the world record.

“We are very proud and happy with what the team has achieved. I am very relieved that we can enjoy a new fantastic record, given that we had some technical problems as late as the day before the attempt” , says Fredrik Rigö, Marketing Communications Manager at Swecon.

The record loader has toured in various events during the summer, but it was decided earlier in the year,  that the wheel loader had another important task in the autumn. Even when the Volvo L60G PCP beat the first record at 103 km/h in early May at Anderstorp Raceway, the team started planning and preparing for a second record attempt. In this work, technicians from Swecon and Volvo Construction Equipment were looking for details that would allow a new record to be set. The team knew all along that there was more speed to be found in the machine.

“The engineers have done a good job, but it is not easy to run an articulated vehicle at this speed, so I am very relieved that we were able to pull it off”, says the operator Karin Olsson.

Many say that there are competitors who run heavy equipment at much more impressive speeds, but Swecon claims that they have developed a speed monster and not focused on retaining the main characteristics of a traditional construction machine. It is clear that there may be more spectacular to look at, but basically it puts the machine in a completely different class. Swecon used only genuine Volvo parts in the L60G PCP project, and that's the big difference. The fact that the loader has a Volvo Stage 3B/Tier 4i engine running on biodiesel makes it even better.

“We wanted to challenge the technology developed by Volvo Construction Equipment engineers, and simultaneously ensure that the machine communicates Volvo's core values of quality, safety and environmental care. Our machine can, with relatively small measures, be restored to a normal Volvo L60G wheel loader. So right now there is no competitor that runs a conventional loader faster than we do. We are the number one when it comes to speed”, concludes Fredrik Rigö.

The machine will be exhibited at TTA – Racing Elite League in Tierp on 15 September, and then go on to Entreprenad Expo at Ring Knutstorp on 20-22 September before visiting the season finale of TTA in Gothenburg on 29 September.

Volvo L60G PCP is basically a conventional wheel loader, completely based on genuine Volvo parts. The machine has been optimised by a team of young technicians at Swecon in cooperation with Volvo Construction Equipment, Bridgestone and Polestar Racing in early spring of 2012. The machine is 95% recyclable and runs on biodiesel (RME), which makes the machine CO2 neutral.

You are using an unsupported browser. For full functionality, consider switching browser to Chrome, Edge, Safari or Firefox.